Dürfen Die Das? (Can They Do That?), a newsmagazine show on the German public-broadcasting network NDR, last week debuted a 17-minute film titled Finasteride: Why Is This Hair-loss Drug Still on the Market? (English-subtitled version here).

That marks the fourth German-language PFS report on network TV in the past 18 months. The previous three include: 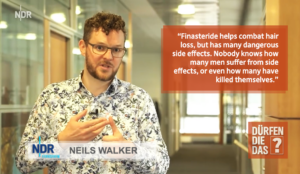 Hosted by Neils Walker, Why Is This Hair-loss Drug Still on the Market? features interviews with two PFS patients, Sebastian and Andreas, both of whose identities are masked.

“I was on the brink of jumping off a bridge,” says Sebastian, who quit finasteride eight years ago.

“The pain started in my abdomen. But then I noticed it radiating quickly throughout my body. By the time it got to my head, I was overcome with depression.

“From the moment the disorder started, I’ve never been able to sleep properly,” he adds. “I still suffer from massive insomnia.”

“The worst for me was the emotional stress, which has been so bad that I would have taken my own life if it had continued,” says Andreas, who, after a decade on the drug, also quit finasteride eight years ago.

“First there are all the sexual symptoms, but also reduced penis and testicle size… Suffering from PFS is like all the life and joy has been sucked out of you,” he adds.

Also featured on the investigative report is Simon Breidert, a psychiatrist from Berlin who has suffered from PFS since 2017 and currently chairs the PFS Research Association.

“I took finasteride from 2015 to 2019. Then I slowly lowered the dose because I had side effects. I had really bad insomnia, and that wasn't written on the leaflet,” he says.

“[B]efore…taking the drug, I read on the leaflet about depression and erectile dysfunction. And I thought, if I were to suffer from any of those issues, I’d simply stop taking it and they’d just disappear,” he adds. “But they didn’t. It took me three to four years to feel somewhat normal again. Those years were a living hell.”

So, too, for one of Simon’s finasteride-taking friends—who wasn’t so lucky.

“He was actually a very cheerful man, but he just killed himself. He jumped off a balcony because he couldn’t sleep anymore,” says Simon. 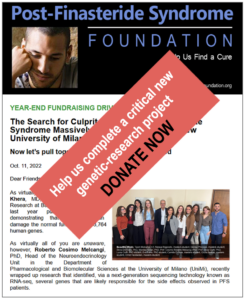 On the clinical front, Neils speaks to Hartmut Porst, MD, founder of the European Institute for Sexual Health, and Michael Zitzmann, MD, a professor of andrology at the University of Munster.

“In my career, I’ve lost two patients who became suicidal. That’s a sad fact,” says Dr. Porst. “[Finasteride] should have been pulled from the market at least 10 years ago.”

Neils as well weighs in on the issue.

“So many side effects, but what are the authorities doing to combat it?” he asks.

“The Federal Institute for Drugs, BfArM, is responsible. They actually issued a finasteride warning back in 2018. A so-called Red Hand letter, but the drug had already been on the market for 20 years,” he continues.

“It's crazy what’s in that letter. Among other things, it states:

“This means that the authorities themselves have confirmed that there’s a risk of erectile dysfunction even after quitting the drug. This is shocking and unbelievable,” Neils concludes.