The French are not fond of finasteride. 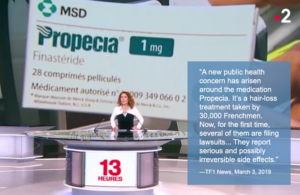 March brought a barrage of media coverage in the nation’s escalating efforts to warn citizens against the medication’s potential dangers.

In a segment on the France 5 program Allo Docteurs, Eric, who took finasteride for a year before quitting in 2013, recalls:

"First I went through a sort of depressed episode that wasn’t addressed at the time…I also experienced a drop in libido. It was quite gradual, so gradual I didn’t connect it with the medication for most of the symptoms I had."

Later Eric says, "You feel like you poisoned yourself, all by yourself, for something futile."

In a report on M6’s Le 1945, Fabrice says, "I’m disabled… this is a catastrophe… I have to get better. I have to. I can’t go on like this. Propecia is a poison. We have to get it out of the pharmacies."

And on TF1’s 13 Heures, an unidentified PFS patient whose libido tumbled to zero after five months on the drug describes the condition’s impact.

"It was horrible, awful. As if my life had stopped," he says. "For many years… I felt it was possible that I could get better… It will perhaps never happen but I can’t stop thinking about it every day."

13 Heures also notes that Propecia is taken by 30,000 Frenchmen, and now, "for the first time, several of them are filing lawsuits, for themselves and to warn others." 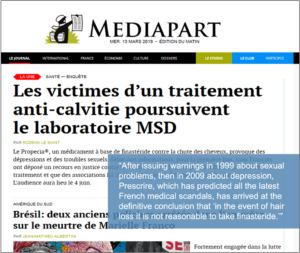 Among those plaintiffs is Jérémy, who was profiled in a Mediapart report headlined The Victims of a Hair-loss Treatment Are Suing MSD (English translation here.)

"In November 2017, he nearly threw himself out a window a few days after taking Propecia for the first time. Back then, [Jérémy’s] temples and his head were thinning just a little... He was far from being the wreck he says he has become," the magazine writes.

"Jérémy read the product insert and was somewhat taken aback by the list of potential adverse side effects, notably the sexual problems. But these side effects were described as ‘infrequent’: one percent of cases, maximum," the story continues.

"I said to myself, 'Why should this happen to me?’ and I decided to take it," adds Jérémy. "I would never ever have taken it if I’d been aware of one-onehundredth of the side effects I’m still experiencing," he adds.

Mediapart is just one of four major print outlets that also ran PFS-awareness stories last month. The others include:

Such coverage follows closely on the heels of regulatory action by ANSM. As we told you in February, the FDA-equivalent agency issued a letter to 100,000 health professionals (English translation here) reminding them that patients treated with finasteride are at risk for developing psychiatric disorders and persistent sexual disorders.

Regulatory Update: Canada Concludes ‘There May Be a Link Between Finasteride and Risk of Suicidal Ideation’ (Feb. 29, 2019 )