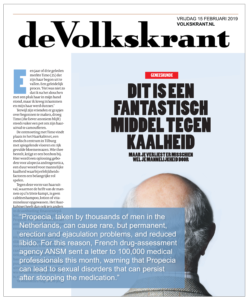 PFS awareness is fanning out across Europe faster than a leaky dyke.

The latest nation to take up our charge is the Netherlands, via its second-largest newspaper, De Volkskrant, which boasts a daily circulation of more than 250,000.

In a 2,600-word story that ran last week, reporter Irene de Zwaan references the growing string of regulatory activity on her continent.

“The hair-loss remedy Propecia, which is taken by thousands of men in the Netherlands, can cause rare, but permanent, erection and ejaculation problems, and reduced libido. For this reason, the French drug-assessment agency ANSM sent a letter to 100,000 medical professionals this month, warning that Propecia (on the international market since 1997) can lead to sexual disorders that can persist after stopping the medication,” she writes in her feature headlined This is a fantastic remedy for baldness (but you might lose your masculinity) (English translation here.)

“The letter, which was distributed in Germany in comparable form last year, further warns about possible psychological side effects such as anxiety, depression and suicidal thoughts,” she continues. “Such a letter is not necessary in the Netherlands because the guidelines of the Nederlands Huisartsen Genootschap (Dutch General Practitioners Association) already clearly state what the side effects are… Within those guidelines, GPs are advised to exercise restraint… because 'data on long-term efficacy and safety are limited or absent.'"

De Zwaan then examines the state of affairs in her own nation.

“In the Netherlands, 6,800 men took the hair-loss medication [Propecia] last year. Another 26,300 patients, according to figures from the Foundation for Pharmaceutical Statistics, used a similar drug that is stronger and more effective: dutasteride… Lareb , the Netherlands-based Pharmacovigilance Centre, has received 213 [adverse drug reaction] reports in recent years about finasteride users and 219 about dutasteride users.”

De Zwaan also cites the research of Steven Belknap, MD, Assistant Professor of Dermatology at Northwestern University’s Feinberg School of Medicine, and how that research is made possible:

“In 2017, Belknap published the results of a study on finasteride and dutasteride users. Of the 15,634 men who previously had no sexual dysfunction, 699 developed erectile problems after taking the medication (4.5 percent), 210 men (1.3 percent) had a lower libido than before. Of the 103 young men (between 16 and 42 years old), 34 (33 percent) had permanent erection problems,” she writes.

“Belknap’s research was funded by the Post-Finasteride Syndrome Foundation, a US-based partnership between physicians and leading scientists. One of the goals is to raise money for independent research into the long-term effects of finasteride use. But with a clear mission: warn about the medicine,” De Zwaan continues. 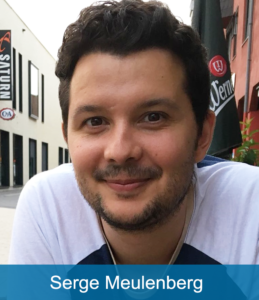 “Those who visit the PFS Foundation website are confronted with a number of alarming statistics from the database of the World Health Organization: 15,222 reports of side effects caused by finasteride worldwide, 59 users committed suicide and 33 made an attempt to do so.”

To give you some perspective on the rate at which PFS symptoms are being reported to the WHO, de Zwann’s Volkskrant report was put to bed on Jan. 31, citing the most up-to-date tally of adverse drug reaction reports (ADRs) for finasteride: 15,222.

As we write this, on Feb. 22, finasteride ADRs have risen to 15,244. That’s exactly one finasteride patient per day reporting adverse reaction to the drug.

“It’s tragic that this product is on the market,” PFS Foundation CEO John Santmann tells the newspaper.

“Doctors prescribe a drug that completely disrupts the normal functioning of one of the most important hormones in the body — testosterone — expecting there to be no serious consequences for the patient. It’s preposterous,” Dr. Santmann continues. “And with that, a lot of money is generated for various players in the industry, which ultimately results in government agencies being lobbied away from taking a critical look at the situation.”

Finally, we applaud those PFS patients who had the courage to share their stories with de Volkskrant. Case in point:

“Thirty-year-old Serge Meulenberg from Sittard says that the medication, which he took for eight years on the advice of his doctor, ‘slowly changed him from a healthy young man to an anxious and dejected person.’ His libido declined noticeably. Panic attacks and depression later followed.

“Ironically, Meulenberg advised his mother to take finasteride because she too was struggling with hair loss. But when she visited her doctor, she reacted with caution. The drug could cause depressive symptoms, the doctor told them. ‘Only then did I look over the current product insert. Turns out that it had been updated since finasteride was originally prescribed to me. I was shocked, and quickly quit that poison.’”

If you or a loved one are suffering from PFS, and feeling depressed or unstable, please review our Frequently Asked Questions page as soon as possible. After that, don’t hesitate to contact the PFS Foundation via our Patient Support hotline: social@pfsfoundation.org

French Urologist to Top TV News Mag: Propecia is a potentially dangerous drug—’I even told my brother-in-law to stop taking it’