On July 4, the Korean Ministry of Food and Drug Safety (MFDS) announced it will revise the warning label on Propecia and its generic versions to include depression and suicidal ideation.

The move by South Korea’s equivalent of the US Food and Drug Administration came just six weeks after the UK’s FDA equivalent, the Medicines and Healthcare Products Regulatory Agency (MHRA), warned that finasteride has been linked to depression and suicidal ideation.

The MFDS action was prompted by a report from finasteride manufacturer MSD Korea Ltd., a subsidiary of Merck & Co., containing approximately 835 adverse drug reactions (ADRs) to finasteride, including erectile dysfunction, among Korean citizens.

MFDS records show that, from 2013 through 2016, the ministry received 1,351 finasteride ADRs within the Korean population, about 35 percent of which were reported by local medical facilities. (English translation here.)

In all, the revised warning will be added to 142 products, made by 98 pharmaceutical companies, all of which contain finasteride.

“Mood swings including gloomy mood, depression and suicidal thoughts were reported by patients taking 1mg of finasteride. Please be sure to observe patients for psychological symptoms. If any of the above symptoms occur, stop finasteride treatment and consult a medical provider.”

The agency’s action was widely reported throughout South Korea. According to the country’s largest news service, Yonhap News Agency: 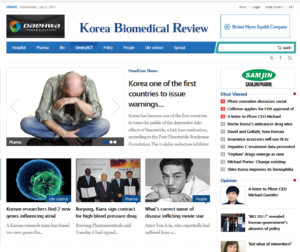 “Propecia was released in the Korean market in 2000. When its patent expired in 2008, several generic drugs were also released in the market… Korean doctors tend to prescribe Monad (JW Shinyak) and Finated (Hanmi Pharm Co.) most among the generic versions of finasteride.”

Additionally, Korea Biomedical Review ran a follow-up story headlined Korea one of the first countries to issue warnings on finasteride, which quoted the PFS Foundation on a number of key points:

“If you look at all the nations on earth, some 195 have yet to warn their citizens of the full risks posed by finasteride,” said Philip Roberts.

“Of the nearly 1,000 PFS patients we have spoken to around the world over the past five years, virtually every single one has said if he had been aware of all the potential side effects, he never would have taken it,” added Roberts.

To help ease the many burdens of PFS, the foundation last year launched a Patient Support Program that connects patients with fellow patients and their family members worldwide. As part of that program, we are able to connect family members of PFS patients who have taken their own lives with other family members dealing with the same tragedy.

Anyone interested in participating in these efforts, should download our Patient Support PDF or Suicide Support PDF, and email it back to social@pfsfoundation.org.

We’ve also been steadily building our list of doctors who see PFS patients and have volunteered to help counsel them on remaining stable. At present, there are 48 such medical professionals on that list, which can be found on our Medical Professionals page.

Meanwhile, we’d like to remind all PFS patients and/or their loved ones who have not yet done so to report their symptoms to the FDA’s MedWatch program as directed here.

Those living outside the United States should also access the WHO’s Collaborating Centre for International Drug Monitoring list of pharmacovigilance agencies and report to their respective health agency.