Looks like Switzerland’s not so neutral after all. At least when it comes to finasteride. 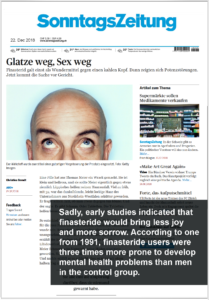 In a SonntagsZeitung story headlined Finasteride was once considered a miracle cure for hair loss. But soon libido disorders and other serious side effects were discovered. Now it’s going to court (English translation here ), science editor Dr. Christina Berndt writes:

“The fact that finasteride impacts sexuality and mood does not come as a surprise. The product suppresses an enzyme that changes testosterone into the more powerful DHT. The reduction of DHT stops androgenetic hair loss but at the same time causes the testicles and the prostate to shrink.

“DHT also suppresses neurotransmitters in the brain, which are responsible for regulating the sexual function, mood, and thinking, says andrologist [Michael] Zitzmann. But could this effect last after discontinuation?”

Dr. Berndt’s 1,100-word report, published Dec. 22 in the weekly Swiss newspaper that sports 168,000 readers, goes on to explain that “Permanent damage also occurs with other kinds of medication, [such as] with the malaria medicine Mefloquine.

“Scientists assume that epigenetic processing might be the reason for post-finasteride syndrome. The intake of such drugs for years leads to a permanent change in gene activity. That is the reason why the side effects remain.”

Dr. Berndt also points out that epidemiological warnings had surfaced two years before finasteride’s 1993 aproval by the US Food and Drug Administration.

“Sadly, early studies indicated that finasteride would bring less joy and more sorrow,” she writes. “According to one study from 1991, finasteride users were three times more prone to develop mental health problems than men in the control group.

“After the market launch, these side effects were undeniable.”

Finally, Dr. Berndt notes that in Switzerland, where an estimated 100,000 men take finasteride, about 2,000 of them suffer from adverse reactions to the drug.

If you or a loved one are suffering from PFS, and feeling depressed or unstable, please don’t hesitate to contact the PFS Foundation as soon as possible via our Patient Support hotline: social@pfsfoundation.org