On Oct. 26, the French National Agency for Drug Safety (ANSM) issued a warning that “Changes in mood, particularly depression, and suicidal ideation, have been reported by patients taking Propecia.”

The agency—France’s equivalent of the US Food and Drug Administration—noted that “finasteride treatment should be discontinued in the presence of any psychiatric symptoms, and that “it is possible to observe persistent sexual disorders after stopping finasteride treatment.”

On Nov. 8, she told the France 2 news magazine 20 Heures “The addition to the [finasteride] insert is a clear warning to patients about the possible occurrence of these side effects, advising them to stop taking the drug and immediately consult their doctor.” 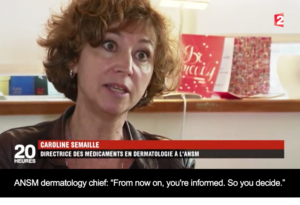 Dr. Semaille also told France 3 News, “Depressive disorders [stemming from finasteride] have not yet been formally established, but we have doubts and prefer therefore to inform the public.”

Dr. Semaille was equally vocal in the print media.

"It was the publication of a study reassessing the risks of finasteride that pushed the [European Medicines Agency] to take more precaution. This Canadian survey of 93,000 men over the age of 66, published in May, showed an increased risk of depression in patients taking finasteride because of their prostate…

"ANSM has also looked closely at reports of adverse reactions to finasteride in France. There have been 40 such reports in nearly 20 years. And those numbers are not taken lightly."

Le Parisien went on to quote Dr. Semaille as follows:

"We know [these adverse drug reactions] are undervalued, because France does not have much pharmacovigilance reflex. And, worldwide, 508 serious psychiatric cases, including 25 suicides, have been identified… From now on, you're informed. So you decide." 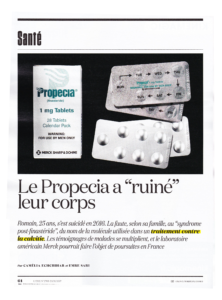 "No one forces patients to take finasteride. What’s important is that they be able to decide, that they be cognizant of what they may be risking if they take the drug."

"When you take finasteride, you are eliminating the effects of testosterone. You don’t need to be a ranking scientist to figure out that finasteride is probably not a good idea,” Dr. Santmann said.

English translations of the Le Parisien and L’Obs stories can be accessed here:

(The original L’Obs story, in French, is here.)

Meanwhile, we’d like to remind all PFS patients, and/or their loved ones, who have not yet done so to report their symptoms to the FDA’s MedWatch program as directed here.

Those living outside the US should also access the WHO’s Collaborating Centre for International Drug Monitoring list of pharmacovigilance agencies and report to their respective nation's health agency.

Finally, if you or a loved one are suffering from PFS, and feeling depressed or unstable, please don’t hesitate to contact us as soon as possible via our Patient Support hotline: social@pfsfoundation.org