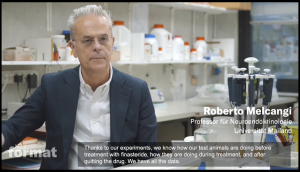 In it, Prof. Melcangi, who heads Neuroendocrinology Unit of the Department of Pharmacological and Biomolecular Sciences at the University of Milano, notes of his numerous studies on rats:

“We can say with certainty that the animals were healthy before finasteride treatment. After treatment, we observed some negative side effects, many of which persisted after quitting the drug. Just like the PFS patients, the rats developed depression, erectile dysfunction, and there are also changes in their intestinal flora,” he says.

Over the past decade, Prof. Melcangi and his team have published a groundbreaking series of PFS studies, including:

“The attentiveness of doctors today is certainly much greater. They are more cautious than in the past,” adds Mencangli, whose work has no doubt played a major role in such awareness.

Featured as well in the film is Simon Breidert, a psychiatrist from Berlin who has suffered from PFS since 2017 and currently chairs the PFS Research Association.

“In the month I discontinued the drug, I died inside. It is still possible to laugh again after a while, but it's like looking through a window, as if it wasn’t me,” says Breidert.

“I worked in the psychiatric field myself. I thought most patients were just hypochondriacs. I was very wrong. A friend of mine also took finasteride and he is no longer alive. He developed a very bad sleeping disorder. He couldn't calm himself down anymore. He ended up jumping out the window.”

Suddenly Bald marks the third German-language PFS report on network TV in less then a year. The previous two are: Tricks of the Beauty Industry (WDR, Germany) and The Side Effects of Finasteride Are Underestimated (NDR, Germany).