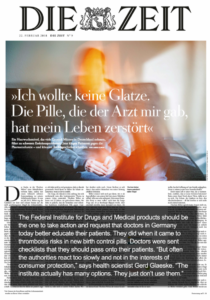 PFS is a growing concern in Germany, too. Ditto Albania.

In December, we told you that the French National Agency for Drug Safety (ANSM) launched a public-awareness campaign warning against reported mood changes in Propecia patients, “particularly depression, and suicidal ideation.”

Written by investigative reporter Anne Kunze, the story focuses on Thorben Weber (not his real name), a German PFS patient whose life has been devastated by the condition.

“Back when Weber was still a cheerful young man, he would flirt often,” Kunze writes of the 33-year-old mathematics and music teacher. “In the teacher’s room, while playing sports on the weekends, while dancing at night; he usually found women who interested him… Now he no longer goes out in the evenings. He no longer trains at the gym… Now he lies on the sofa and watches series on Netflix.”

But Weber’s “real stunner,” Kunze continues, “reared its head in the form of so-called ‘brain fog’… It made him perceive colors as faded, and contrasts in his environment grew blurry… [He] suddenly started forgetting names of students he had taught for years… He no longer dared to go by car into the mountains, fearing he would not be able to find his way back.”

Within a year, “Weber was no longer able to shop for groceries or even to do his own cleaning, so he…moved back in with his parents. For weeks, he couldn’t go to work. One day he wrote down on a piece of paper that his younger sister should get his Audi A3 and his best friend his electric piano. Then he scouted a spot on the railroad embankment where…the trains go too fast to break.” 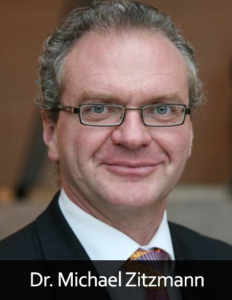 Fortunately, Weber mustered the will to live, and was eventually diagnosed with PFS by Dr. Michael Zitzmann, an andrology professor at the University of Munster, who is also among our volunteer team of health care professionals listed in the Patient Support section of the PFS Foundation website.

“Using finasteride for hair loss is like shooting at sparrows with cannons,” Zitzmann, who has examined approximately 100 PFS patients to date,” tells Die Zeit. “The drug…blocks not only the super hormone but also other hormones that affect thinking and psyche, mood and emotions. Discontinuation of the drug should actually make the hormones work again…but apparently, something breaks down in some men, in the prostate, in the brain, in the whole organism.”

Die Zeit also asserts that “the Federal Institute for Drugs and Medical Products should be the one to take action and request that doctors in Germany today better educate their patients. They did that when it came to thrombosis risks in new birth control pills. Doctors were sent checklists to pass onto their patients.”

Meanwhile Dr. Kim Drasa has been busy with a public-awareness campaign in his home nation of Albania. 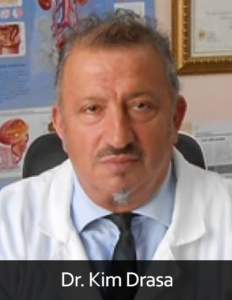 The President of the Albanian Urologists & Sexologists Association, who’s also among our volunteer team of Patient Support health care professionals, recently penned an op-ed in Gazeta Panorama, one of Albania’s best-selling newspapers, and its highest-trafficked website.

“After being on the drug for just a week, I experienced severe ED. Moreover, I suffered from trembling, nerve twitches, anorexia, insomnia and other symptoms,” the urology professor writes. “So I immediately quit dutasteride. Within a week, I had stabilized—and never used it again. And I never again prescribed the drug to my patients who were sexually active.”

“In my own practice,” adds Dr. Drasa, “I have to date identified 137 5ARI patients who suffer from depression, self-harm and suicidal ideation, some of whom went on to attempt suicide. The Albanian National Agency for Drugs and Medical Devices needs to issue a drug-safety warning that finasteride and dutasteride can cause impotence and depression, as well as precipitate self-harm, suicidal behavior, and/or suicide.”

In France, meanwhile, we continue to see the impact of ANSM’s public-awareness campaign warning against depression and suicidal ideation. 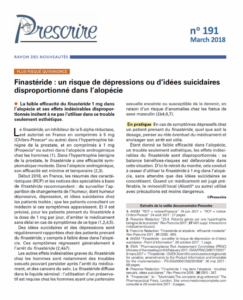 Case in point: the current issue of La Revue Prescrire, a medical journal wholly independent of the pharmaceutical industry, features an article titled Finasteride: A growing risk of depression or suicidal ideation in hair-loss treatment.

“Suicidal ideation and depression are regularly reported in patients taking finasteride, including low doses for alopecia,” says the journal. “Given its low efficacy in treating alopecia, an exclusively aesthetic condition, the undesirable effects of finasteride are disproportionate: its balance of benefits versus risks is unfavorable in this situation.”

In a Periodic Safety Update last year, the European Medicines Association recommended that finasteride packaging be revised to include warnings of depression and suicidal ideation. In all, there are 31 member states that could potentially take such action, seven of which have done so to date: Belgium, Denmark, France, Germany, Netherlands, Poland and the United Kingdom.

English translations of Die Zeit and Gazeta Panorama stories can be accessed here:

Once again we’d like to remind all PFS patients who have not yet done so to report their symptoms to the FDA’s MedWatch program as directed here.

Those living outside the US should also access the WHO’s Collaborating Centre for International Drug Monitoring list of pharmacovigilance agencies and report to their respective health agency.

Finally, if you or a loved one are suffering from PFS, and feeling depressed or unstable, please don’t hesitate to contact us as soon as possible via our Patient Support hotline: social@pfsfoundation.org