Separately, safety signal of causal link between finasteride and diabetes mellitus issued by Saudi FDA in 2021 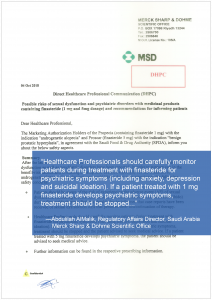 In a confidential 2018 letter to health care professionals, Merck & Co.’s Saudi Arabian subsidiary warned that finasteride patients should be carefully monitored for psychiatric symptoms including anxiety, depression and suicidal ideation.

The DHPC was turned up last week on the website of the Saudi Food & Drug Authority (SFDA) during the PFS Foundation’s annual audit of federal drug-regulatory agencies worldwide. It could not be found, however, on the MSD Saudi Arabia website, nor on the website of Organon, the Merck spinoff that last year acquired finasteride products Propecia (finasteride 1 mg) and Proscar (finasteride 5 mg). 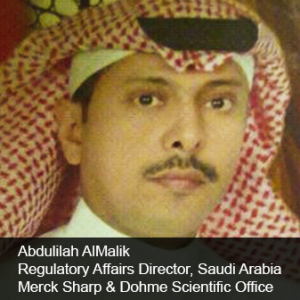 “This letter essentially amounts to what the US Food and Drug Administration calls a ‘black box warning,’ alerting not only health care providers but the general public that finasteride could cause serious injury or lead to death,” says PFS Foundation CEO John Santmann, MD.

“But that presents the question, Why did Merck mark the warning, which clearly has global public-health implications, as confidential? If the warning was serious enough to alert the people of Saudi Arabia, why not the people of Israel or South Africa or Japan or Argentina or any nation, for that matter?” Dr. Santmann continues.

“Since our founding in 2012, we’ve been contacted by more than 3,000 PFS patients from every continent except Antarctica. Within that sample are both men and women, from all sexual identities, ranging in age from 15 to 85, which leads us to believe that any human being on earth is potentially susceptible to PFS.” 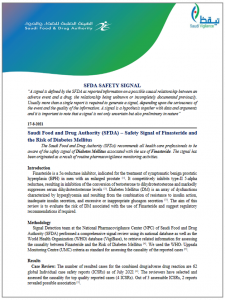 Separately, in 2021, the National Pharmacovigilance Center of the SFDA assessed the causality between finasteride and the risk of developing diabetes mellitus. That, by examining its own data in tandem with data from the World Health Organization’s VigiBase.

The results revealed a positive statistical association for the drug/ADR combination, meaning diabetes mellitus with the use of finasteride has been observed more than expected compared to other medications available in the WHO database.

In a safety signal released in August, the agency concluded: “The weighted cumulative evidence…are sufficient to support a causal association between finasteride and the risk of diabetes mellitus. Health regulators and health care professionals must be aware of this potential risk.”