US District Court, meanwhile, orders all sealed documents in Propecia litigation to be unsealed 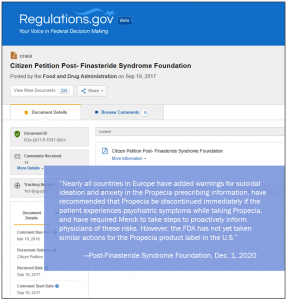 The PFS Foundation has filed supplements to its FDA Citizen Petition requesting that the agency “immediately require withdrawal of marketing approval for Propecia…because the risk of serious injury from the drug outweighs its limited benefits.”

The two supplements were filed Dec. 1, 2020 and posted publicly late last month on Regulations.gov, a US Federal government website that serves as a document repository allowing citizens to participate in the rulemaking processes of some government agencies.

Petition Supplement 1 contains scientific research, epidemiological data and other pertinent information that was published after our Citizen Petition was filed on Sept. 19, 2017, including:

(c)  Drug Regulatory Agencies Outside the US. The foundation writes:

Nearly all countries in Europe have added warnings for suicidal ideation and anxiety in the Propecia prescribing information, have recommended that Propecia be discontinued immediately if the patient experiences psychiatric symptoms while taking Propecia, and have required Merck to take steps to proactively inform physicians of these risks. However, the FDA has not yet taken similar actions for the Propecia product label in the United States:

Published Sept. 11, 2019 after a yearlong investigation, the story by Dan Levine uncovered testimony by former Merck executives in the US Propecia litigation suggesting that the pharmaceutical giant downplayed the drug’s side effects during clinical trials. Specifically, Merck found evidence of persistent side effects in their original clinical trials for finasteride but failed to disclose such in their warning label.

Compounding this lack of transparency, the judge in the litigation, Brian Cogan, inexplicably allowed Merck and plaintiffs’ lawyers to keep information submitted in court confidential. As Levine, whose report also broke the news of our Citizen Petition, explained:

Some of these documents slipped through cracks in the wall of secrecy. One was inadvertently entered into the public record, staying in the open for a year before being sealed, but in the meantime, it made its way into an obscure public filing, where Reuters found it. The other was faultily redacted, making it possible for this reporter to read it.

Among those documents were depositions of Charlotte Merritt, who oversaw regulatory activity for Propecia, and Paul Howes, who headed up marketing for the prescription medication. 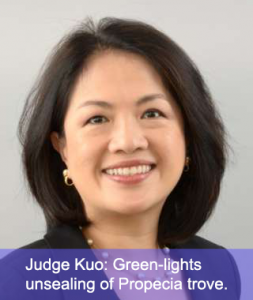 Merritt admitted that, in 2002, four years after Propecia came to market, Merck altered the drug’s label for sexual adverse events, from “resolution occurred in all men who discontinued therapy with Propecia” to “resolution occurred in men who discontinued therapy with Propecia.” Then she testified that Merck deleted the word “all” because of evidence from the clinical trials that adverse events did not clear up after patients quit the drug.

Howes admitted that Merck knew that warnings of sexual side effects, especially persistent to permanent side effects, would have negatively impacted Propecia sales.

A day after Levine’s story broke, Reuters filed a motion in US Federal Court to unseal all documents filed in the Propecia litigation. The largest news agency in the Western world argued that “This is a case of tremendous importance that has been sealed without on-the-record findings explaining that sealing. The First Amendment precludes such an outcome."

In her decision, Kuo noted that Merck’s arguments for keeping the lid on those documents “are so weak that they would not overcome even a low presumption of access under the common law.”

Regulatory Update: Canada Concludes ‘There May Be a Link Between Finasteride and Risk of Suicidal Ideation’ (Feb. 28, 2019)