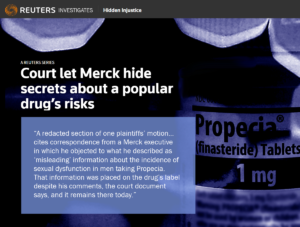 A year in the making, the Reuters story uncovered testimony by former Merck executives in the US Propecia litigation suggesting that the pharmaceutical giant downplayed the drug’s side effects during clinical trials.

The story is part of a broader investigative series examining the decades-long trend of judges in product-liability cases sealing evidence that might otherwise help prevent public health and safety crises.

As a result of such secrecy, Reuters notes, “hundreds of thousands of Americans have been killed or seriously injured by allegedly defective products” including drugs, medical devices and automobiles.

Billed as “Hidden Injustice,” the Reuters series kicked off June 25 with a report titled How judges added to the grim toll of opioids, which quickly sparked action on Capitol Hill.

On Sept. 26, a subcommittee of the US House of Representatives Judiciary Committee will hear testimony about the lack of transparency in our federal courts, with a focus on judges known to lock up critical documents, and in doing so flout US law that presumes court filings to be public.

Hank Johnson, a Democratic congressman from Georgia, last week told Reuters that the probe is meant to shed light on the issue so judges voluntarily take action to abide by case law. “If they don’t,” he said, “then legislation can commence.”

Among those testifying before Congress will be Levine, the reporter responsible for ferreting out evidence of Merck hiding secrets about its prescription hair-loss medication that, since 1997, has been prescribed to millions of men, including President Donald Trump.

A Push for Full Disclosure

A day after Levine’s report hit news desks worldwide, Reuters filed a motion in federal court to unseal documents filed in the Propecia mass-tort litigation that reveal potential risks associated with the drug. The motion refers to one of the four “bellwether” cases.

“This is a case of tremendous importance that has been sealed without on-the-record findings explaining that sealing. The First Amendment precludes such an outcome,” Reuters argues.

“These documents are important not only to Reuters’ own investigative reporting about Propecia but also to members of the public at large who continue to take this medication and doctors who continue to prescribe it to patients.”

Citing from Levine’s report, the motion explains that though sealed documents including depositions by former Merck executives were partially redacted, “Reuters was able to view the blacked-out material after copying it from a digital version of the motion and pasting it into a document in a different format.”

In one such document, Keith Kaufman, MD, the head of the Propecia clinical development program, discussed alternate ways of interpreting data from the clinical trials. Referring to language on the Propecia label stating that of those men who took the drug for all five years “no more than 0.3%” suffered sexual side effects by year five, he called that figure “totally misleading.” Because by year five, “you have weeded out the dropouts with the sexual [adverse experiences].” 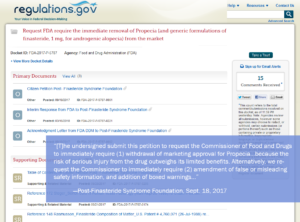 During his investigation, Levine also discovered the Citizen Petition that the PFS Foundation filed with the US Food and Drug Administration two years ago, requesting that the agency “immediately require withdrawal of marketing approval for Propecia…because the risk of serious injury from the drug outweighs its limited benefits.”

Alternatively, we asked that (a) Boxed Warnings, Precautions and Contraindications to Use be added to the Propecia product label for various serious risks of the drug, including persistent erectile dysfunction, major depressive disorder and male infertility, (b) the FDA make other major product label revisions and (c) the FDA require Merck to develop and implement a Risk Evaluation and Mitigation Strategy Plan.

Among the court documents Levine also found and subsequently published alongside his report is a motion filed by the Plaintiffs’ Executive Committee, along with exhibits of deposition testimony by former Merck executives Charlotte Merritt, who oversaw regulatory activity for Propecia, and Paul Howes, who headed up marketing for the drug.

As Levine explains, those documents were initially “filed openly in federal court. One year later, lawyers told a judge they had meant to file [them] under seal, and she agreed to seal [them] without explanation.”

Following are excerpts from Merritt’s and Howes’ 2016 depositions:

“Well, as you saw, there were some men in whom after some period of time the [sexual adverse events] did not resolve so this is—so the word ‘all’ was no longer factual as relates to the longer term data beyond the initial period of the trial.”

—When asked if anything prevented Merck, again in its product-label revision of 2002, from disclosing data they held, for over a year at that point, about men in the clinical trials “continuing to experience sexual adverse events upon discontinuation” of the drug, Merritt said:

“It could have been done if Merck felt that that was an appropriate thing to label based on the data. I can’t comment on why—why it was done the way it was done.”

—With reference to an internal Merck publication titled “Evaluation of the 1998 Direct-to-Consumer Advertising Campaign for Propecia, End-of-Year Report on the Consumer Awareness and Action Study,” dated March 15, 1999, Howes was asked: “Does it stand to reason that if 20% of the men who were in the pool of guys who could use the drug would not touch it, recognizing that the symptoms could go away, that that percentage would have gone even higher if they thought that use of the drug could cause permanent, persistent problems for them?” Howes replied:

—When asked, again in reference to the above-mentioned study, “So the walkaway from this was that we understand we have a problem with sexual side effects, and we, as a company, have to figure out how to address that?” Howes said: