After enduring decades of symptoms that ran the gamut from tooth loss to testicular cancer, Ryan Clark prompted his nation’s drug agency to take a telemed to task for failing to adequately disclose finasteride’s dangers.

And though he’d hoped for more significant action, the 54-year-old PFS patient from the northeast of England is encouraged to be making a difference on the pharmacovigilance front. 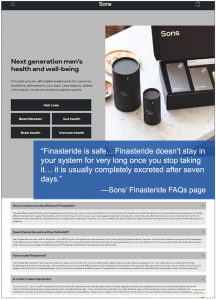 Ryan, who spent most of his career employed by Her Majesty’s Government, first contacted the Medicines and Healthcare Products Regulatory Agency (MHRA) in June 2021, hoping to determine how much they knew about the debilitating condition, and for how long they’d known it. Via the Freedom of Information Act 2000, he requested “all internal emails in regards to… ‘Post Finasteride Syndrome’ caused by the drug finasteride [from] 2001 to May 2021.”

A month later, MHRA Scientific Assessor Alison Banner Simpson responded via email: “We have searched our records and attached all relevant emails.” But she also noted: “In line with other regulators worldwide the MHRA considers that based on the currently available data on quality, safety, and efficacy the balance of benefits and risks of finasteride is positive.”

(For the MHRA’s full response, which was made public on Dec. 29, click here.)

Frustrated, Ryan again wrote the agency, on Sept. 29, to tell them how finasteride had decimated his health, career and family. Two months later he received a response from Simpson, reading in part:

As I am sure you [are] aware, the labelling on the side effects with Propecia are different in the US and in Europe, such that sexual dysfunction…is known to persist after discontinuation of treatment in some patients and this is described in the product information in the UK and EU… Additionally, depressed mood, anxiety, depression and, less frequently, suicidal thoughts are known side-effects of treatment with finasteride 1 mg…

‘PFS’ is not widely recognised by the scientific community or as a medically recognised syndrome. As such, ‘PFS’ is not a known side effect of treatment with finasteride. However, many of the individual symptoms which patients consider are associated with ‘PFS’ are described in the product information… Given the current labelling, there is no new evidence which would warrant any further updates to the product information at present.

Again disheartened that the MHRA declined to mandate more thorough and strenuous finasteride warnings, let alone educate doctors and fund PFS research, Ryan thought he’d hit a brick wall. But less than a month later he learned it had heeded one of his complaints—that Sons, an online pharmacy touting itself as “Next generation men’s health and well-being,” completely glossed over the drug’s potential to cause psychological and cognitive damage in a subset of patients.

On Dec. 14, based on evidence submitted by Ryan, the agency published a decision titled September 2021 Promotion of finasteride by Careforsons Limited t/a Sons. It read, in part:

A member of the public contacted MHRA to raise concerns about the information provided for finasteride on the Sons website. The complainant did not consider that the mental-health side-effects and emotional wellbeing were sufficiently or appropriately discussed on the webpages where this prescription-only medicine was highlighted.

MHRA contacted Careforsons Limited regarding the concerns and asked them to review their website to ensure readers are given a balanced overview of the potential risks and benefits of using this medicine and to avoid absolute statements of safety.

Among the statements Sons makes on its Finasteride FAQs page are: 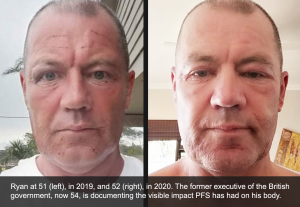 “I realize this is a small gesture by the MHRA, but it’s significant to me—as it should be to all PFS patients—because it shows that a single voice can help hold an entire system accountable for protecting public health,” Ryan tells us.

“I encourage anyone who believes that nothing can be done about the PFS epidemic to begin educating him- or herself immediately on the mechanisms in place at their own drug agencies for bringing the horrors of PFS to light.”

Few men know those horrors better than Ryan. Then an operations manager overseeing more than 100 staffers in the Civil Service, a branch of Her Majesty’s Revenue and Customs division that implements national policies, he was first prescribed Propecia in 1998.

“The only advertised side effect of Propecia was the potential for a temporary loss of libido which, it was claimed, would return upon quitting the drug,” says Ryan. “Yet my experience was vastly different. Within weeks, I developed extreme anxiety and chronic insomnia.”

So Ryan, who’d enjoyed tiptop levels of fitness his whole life and had zero history of such conditions, returned to the prescribing GP, only to be told that the cause was stress.

Over the next several years, he says he developed an array of more than 30 additional symptoms that seems cribbed from a Stephen King tale, including these 14 most severe:

"What I find particularly crushing is the chronic insomnia and incessant emotional distress brought about by fluctuating neurosteroid levels," says Ryan. "That's what causes many PFS patients to take their lives." 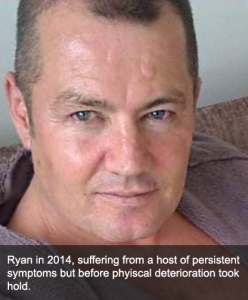 In all, Ryan spent 15 years without any hint that finasteride could be the cause of his suffering. Worse, he says, is that, among the multitude of MDs who treated him, no one inquired about his finasteride use.

During his own search for what ailed him, Ryan learned of the Yellow Card Scheme, the MHRA’s system for “collecting and monitoring information on safety concerns such as suspected side effects or adverse incidents involving medicines and medical devices."

"It’s extremely worrying that not one doctor suggested I submit a Yellow Card on finasteride or filed one on my behalf," he says.

Only after stumbling upon the PFS Foundation website in 2015 did he flush his Propecia down the toilet, never to look back. A year after that he was officially diagnosed with PFS by an endocrinologist.

Still, Ryan’s life failed to improve. In fact, things have gotten progressively worse. PFS has taken an enormous toll on his marriage and personal relationships. He and wife Lyndsey have a nine-year-old son, and that family is the main reason he continues to fight.

"I have a lot to live for but my unrelenting symptoms make each day unbearable," he says. "And the fact that virtually every doctor I've seen has no clue as to what's going on makes my situation even worse. If things don't change soon, more lives will be lost."

Because of the deterioration in his physical health and cognitive function, Ryan finally left his job in 2019. “According to my most recent medical assessment, it’s unlikely I’ll ever be able to work again,” he says.

“I’m apparently unique in that I’m one of the unlucky few who gets worse—and is still alive—after taking this Frankenstein of a drug.”

If you’d like to learn more about navigating pharmacovigilance channels and/or help with his efforts, feel free to contact Ryan at clarkpod1@hotmail.co.uk.