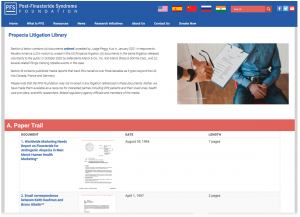 The PFS Foundation has launched a new section of its website to house documents from the US Propecia litigation unsealed by court order earlier this year.

Part A of our Propecia Litigation Library (Paper Trail), contains 479 pages of such documents, along with 125 pages of related content, including Merck’s FDA filing for the addition of depression to the Propecia label.

Part B (Media Pursuit) contains 17 media reports, published in the US and abroad over three decades, that track the Propecia narrative from FDA approval of the drug in 1997 to revelations from the unsealed documents earlier this year.

In 1997, for example, The New York Times noted, “Critics…complain that no long-term studies have been conducted on” Propecia (A Pill for Male Pattern Baldness Wins Approval From the FDA).

The unsealing effort got under way in September 2019 when Reuters published an investigative report that uncovered testimony by former Merck executives suggesting that the pharmaceutical giant downplayed the drug’s side effects during clinical trials.

A day after that story broke, the news agency filed a motion in US Federal Court to unseal documents filed in the Propecia litigation, noting, “This is a case of tremendous importance that has been sealed without on-the-record findings explaining that sealing. The First Amendment precludes such an outcome.”

In her decision, Kuo noted that Merck’s arguments for keeping those documents under wraps “are so weak that they would not overcome even a low presumption of access under the common law.”

Regulatory Update: Canada Concludes ‘There May Be a Link Between Finasteride and Risk of Suicidal Ideation’ (Feb. 28, 2019)