The first study to consider and demonstrate gene expression differences as a potential etiology of the sexual dysfunction experienced by PFS patients has been published by a research team at Baylor College of Medicine (BCM). 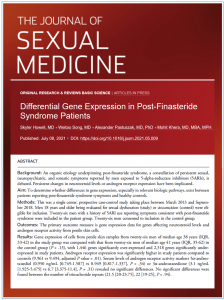 Gene expression is the process by which DNA replicates to produce RNA, which ultimately produces proteins that are responsible for the development and function of a person’s organs and organ systems.

Titled Differential Gene Expression in Post-Finasteride Syndrome Patients, the study was published online in The Journal of Sexual Medicine on July 8, 2021.

The study’s primary outcome measure was “gene expression data for genes affecting neurosteroid levels and androgen receptor activity from penile skin cells.” Twenty-six men (median age 38 years) with a history of 5-alpha-reductase inhibitor (5ARI) use for hair-loss, including finasteride and dutasteride, and 26 men (median age 41 years) presenting for elective circumcisions who had not previously taken 5ARIs, comprised the study population.

• Of particular importance, androgen receptor (AR) expression was significantly higher in study subjects compared to controls (P value = 0.01). “Over-expression of AR in penile tissue may be responsible for sexual symptoms experienced by PFS patients… The fact that AR expression was elevated in PFS patients suggests a chronic androgen-deficient, or activity-deficient, state.”

• 15 over-expressed and 12 under-expressed genes involved in AR signaling were also identified. “Given that gene expression has been implicated in numerous disease states, AR overexpression in response to an androgen-deficient state may negatively affect multiple tissues throughout the body.”

• Persistent gene expression differences that may explain changes in the levels of progesterone, testosterone, and their neurosteroid metabolities seen in PFS patients were identified. “Processes involving regulation of cholesterol synthesis were particularly involved… Separately from the effects of neuro-hormones, processes controlling nerve cell health appear to be impacted by 5ARI exposure.”

• “Upregulation in pathways controlling homeostasis and responses to stress” were observed. For genes related to steroid metabolism, specifically corticosterone and cortisol, several differentially genes were identified. Cortisol and corticosterone, which are specifically known to be elevated in stress states, were over-expressed in PFS patients.

• “The under-expression of…‘protective genes’ [in PFS patients] in the context of increased cortisol levels combined with over-expression of inflammatory regulators portrays an emergent picture of chronic stress leading to diverse body systems including the circulatory, skeletal, and nervous systems.”

“At this time, patients should be informed regarding possible side effects of 5ARI that may persist even following discontinuation of treatment as part of their counseling,” concludes Khera.

“In pharmacogenomic studies, it’s not uncommon to find several, or even several dozen, genes affected by drug exposure,” says PFS Foundation CEO John Santmann, MD, who was not involved in the research. “But to find more than 3,700 genes possibly impacted by a single drug is frightening—and makes a strong case for immediately ceasing finasteride therapy.”

The study, funded by the PFS Foundation, marks the second and final phase of BCM’s PFS investigation.

Phase I, a case-control study published last year in Translational Andrology and Urology, discovered the presence of vascular abnormalities in the penis of PFS patients (median age 38) who previously discontinued the use of 5ARIs for hair loss.

The penile vascular abnormalities were diagnosed by penile duplex Doppler ultrasound, and marked the first published report of organic pathology in the penis of PFS patients as evaluated by a common clinical test that objectively evaluates sexual function.