Titled Altered methylation pattern of the SRD5A2 gene in cerebrospinal fluid of post-Finasteride patients, the pilot study was published this month in the online edition of Endocrine Connections. 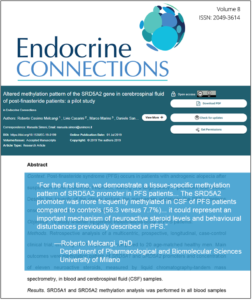 The SRD5A2 gene provides instructions for making steroid 5-alpha reductase, type 2, the enzyme that is inhibited by finasteride (Propecia and Proscar). This enzyme is involved in the processing of androgens and multiple other steroid hormones. Specifically, the enzyme converts testosterone into the more potent androgen, dihydrotestosterone (DHT), and multiple other steroid hormones into neuroactive steroids. DHT is essential for the normal development and maintenance of male sex characteristics, and normal function of the sexual organs. Neuroactive steroids are critically important for normal brain and central nervous system function.

The most notable findings of Prof. Melcangi’s study is that “The SRD5A2 promoter was more frequently methylated in the CSF of PFS patients compared to controls (56.3 versus 7.7%).”

Publication of this pilot study marks the completion of Phase III of Prof. Melcangi’s ongoing investigation into PFS. The study was aimed at determining the root causes of the condition, a necessary first step in the identification of a molecular target that might possibly be a focus in the development of future drug therapies.

Phase II of Prof. Melcangi’s research was published in the January issue of Psychoneuroendocrinology. Titled Treatment of male rats with finasteride, an inhibitor of 5alpha-reductase enzyme, induces long-lasting effects on depressive-like behavior, hippocampal neurogenesis, neuroinflammation and gut microbiota composition, the animal-model study demonstrated that “Finasteride treatment causes several alterations in the hippocampus,” the section of the brain responsible for processing long-term memory and emotional responses.

Phase I of the investigation, published in the July 2017 edition of The Journal of Steroid Biochemistry and Molecular Biology and titled Neuroactive Steroid Levels and Psychiatric and Andrological Features in Post-Finasteride Patients, demonstrated that PFS patients suffer from altered levels of critical brain-function regulators, including neuroactive steroids.

That three-year study, in which 16 men with PFS and 25 control patients were evaluated, also uncovered evidence of neuropathy of the pudendal nerve among those with severe erectile dysfunction.