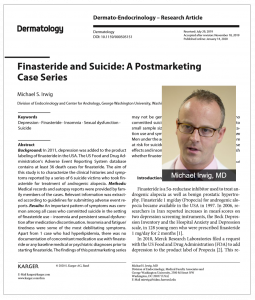 “Clinicians should be aware that men under the age of 40 who use finasteride for alopecia are at risk for suicide if they develop persistent sexual adverse effects and insomnia.”

The aim of the study, titled Finasteride and Suicide: A Postmarketing Case Series and published in Dermatology, was to “characterize the clinical histories and symptoms” reported by suicide victims who took finasteride to treat hair loss.

In all, Dr. Irwig examined six such cases, based on medical records and autopsy reports provided by family members. Those cases, who lived in the USA, the UK and France, began taking finasteride between the ages of 19 and 36 years, and died between the ages of 25 and 42.

Apart from one case who had hyperlipidemia, there was no documentation of concomitant medication use with finasteride, or any baseline medical or psychiatric diagnoses, before starting the drug.

“The most prominent psychiatric symptoms were depression, anxiety, panic attacks, feelings of isolation and ‘brain fog,’” reports Dr. Irwig, while “Some of the most debilitating symptoms were insomnia and fatigue.”

In a separate effort seeking to bring deeper PFS awarenes to the medical community, Abdulmaged M. Traish, PhD, Professor of Biochemistry and Urology at Boston University School of Medicine, has published a review in Fertility and Sterility.

Titled Post-finasteride syndrome: a surmountable challenge for clinicians, it summarizes the findings from more than 250 studies published between 1989 to August 2019 on clinical use of finasteride and dutasteride.