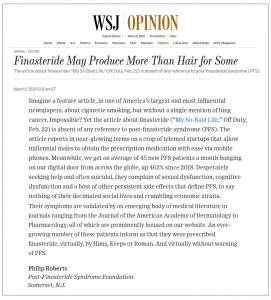 On February 21, The Wall Street Journal ran a 1,280-word story headlined Losing Your Hair? Why This Solution Is No Longer Shameful, which went, in part, like this:

[In 1991]…effective methods like Rogaine or hair plugs were discussed in hushed tones. A… TV ad didn’t mention hair loss, hawking instead a videotape that would reveal the “complete story”… That began to change in 2017 with the introduction of a trio of startup brands—Hims, Keeps and Roman—that talked in refreshingly frank, even witty ways about their products’ potential to help men counteract hair loss…

Though finasteride is a prescription medication requiring doctor approval, each company offers customers the ease of corresponding with a network of doctors digitally. You fill out a questionnaire, snap some scalp selfies (if required), and if a doctor thinks you need it, they’ll write a prescription which the brand will fill…

Crucially, the look of all these products diverges from an austere Rogaine sprayer… The handsome packaging means men can shamelessly plop it in their bathroom. Roman’s finasteride bottles are as minimalist as an AirPod case; Hims’s tubes are like a more masculine version of cosmetics brand Glossier’s packaging; and Keep’s cherry-red logo calls to mind Netflix’s.

As we do whenever we read a report on finasteride that makes no (or scant) mention of PFS, we emailed the writer to educate him on the many potential dangers of finasteride, and offered to put him in touch with the nearly 2,000 men worldwide who to date have reached out to us to let us know that their lives were unwittingly decimated by the drug.

Since the foundation’s inception in 2012, we’ve dispatched such missives to roughly 100 journalists. Yet in only about eight percent of those cases did they respond.

So when we received no word back from the WSJ writer four days after reaching out to him, we weren’t a bit surprised. The next day, however, we were pleasantly surprised to receive a note from him that began: “Thanks very much for writing in and please accept my sincere apologies for the delay. I was conferring with my editors on this matter.”

He then invited the foundation to submit a Letter to the Editor, which we proceeded to whip off. One week later, that letter appeared in the WSJ’s weekend edition under the headline Finasteride May Produce More Than Hair for Some.

In it, we note that the PFS Foundation is now contacted by an average of 45 new PFS patients a month from across the globe, up 462% since 2018. Also that an “ever-growing number of these patients inform us that they were prescribed finasteride, virtually, by Hims, Keeps or Roman. And virtually without warning of PFS.”

Case in point, just two months ago, a 35-year-old patient from California told us:

I have had a horrible experience with Hims. Their website only lists a few possible side effects and they play them down as if they happen you can just stop taking the medication. I could barely get a response from them or any information on my side effects until I started mentioning legal action, negligence, and malpractice.

And less than 24 hours ago, another finasteride user, this one 36 and from Washington State, wrote us to say:

I took finasteride from Keeps.com from November 2019 until this last Sunday. I have been feeling very depressed for the last couple weeks, and decided that it might be due to the medication. I then did some additional research and discovered that I'm not alone in this.

In all, as a result of our letter in the WSJ, 18 new PFS patients have reached out to us for support in the past three days. That’s a 300% rise over the 462% rise referenced in the paper.

What’s more, traffic to our website this past weekend totaled 3,338 unique users, with Saturday hitting an all-time one-day high of 1,722 users. That’s a 251% rise over the same period a week earlier.

But here’s what you—particularly those living in non-English-speaking countries, where it’s harder for us to monitor media activity—can do to help: If/when you come across a report about Hims, Keeps and/or Roman, please email a link to Philip Roberts, who will in turn do his best to reach out to the writer.

By educating the media, and the telemeds, in this manner, we can hopefully help prevent new cases of PFS in the future.