In a newly published prospective case-control study in Translational Andrology and Urology, Mohit Khera, Director of the Laboratory for Andrology Research at Baylor College of Medicine, and his research team report the presence of vascular abnormalities in the penis of PFS patients (median age of 38) who previously discontinued the use of 5-alpha reductase inhibitors (5ARIs) for hair loss. The penile vascular abnormalities were diagnosed by penile duplex Doppler ultrasound, a laboratory test routinely performed by urologists to evaluate erectile function in older men with benign prostatic hyperplasia (BPH). 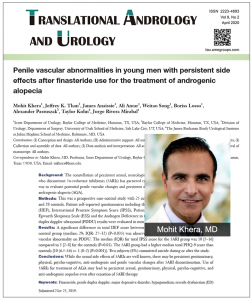 “This is the first published report of organic pathology in the penis of PFS patients as evaluated by a common clinical test that objectively evaluates sexual function ,” says PFS Foundation CEO John Santmann. “ These abnormal findings are rarely seen in men in this younger age group. Khera’s findings are particularly meaningful because many physicians frequently dismiss PFS patients’ sexual complaints as having a psychogenic cause.”

The research team also evaluated the effects of finasteride on multiple men’s health parameters. Twenty-five PFS subjects were compared to 28 age-matched controls. All subjects were treated with finasteride while one subject also took dutasteride after quitting finasteride.

Other notable results of the study, which was funded by the PFS Foundation, include:

Khera concludes that use of 5ARIs for the treatment of hair loss “may lead to persistent sexual, genitourinary, physical, psycho-cognitive, and anti-androgenic sequelae even after cessation of 5ARI therapy.”