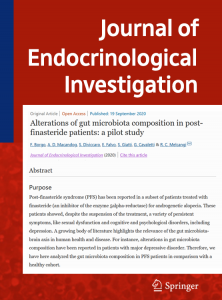 Titled Alterations of gut microbiota composition in post-finasteride patients: a pilot study, the research was published this month in the Journal of Endocrinological Investigation.

Roberto Cosimo Melcangi, Ph.D. at UniMi’s Department of Pharmacological and Biomolecular Sciences, led a team of six researchers from three institutions who analyzed fecal microbiota of 23 PFS patients through 16S rRNA gene sequencing, and compared it with fecal micobiota in ten healthy male cohorts via the same genetic sequencing.

“There is a growing body of literature showing the relevance of the gut microbiota-brain axis both in human health and disease. In particular, alterations in gut microbiota composition have been reported in patients with major depressive disorder as well as in animal models of depression,” writes Team Melcangi, before concluding that:

“Gut microbiota population is altered in PFS patients, suggesting that it might represent a diagnostic marker and a possible therapeutic target for this syndrome.”

Publication of this pilot study marks the completion of Phase IV of Prof. Melcangi’s ongoing investigation into PFS.
Phase III of Prof. Melcangi’s research, designed to “study whether epigenetic modifications occur in PFS patients,” successfully demonstrated epigenetic modifications in PFS patients. Titled Altered methylation pattern of the SRD5A2 gene in cerebrospinal fluid of post-Finasteride patients, the pilot study was published July 2019 in Endocrine Connections. He concluded that methylation of the SRD5A2 promoter in PFS patients “could represent an important mechanism of neuroactive steroid levels and behavioral disturbances previously described in PFS.”

Phase II was published in the January 2019 issue of Psychoneuroendocrinology. Titled Treatment of male rats with finasteride, an inhibitor of 5alpha-reductase enzyme, induces long-lasting effects on depressive-like behavior, hippocampal neurogenesis, neuroinflammation and gut microbiota composition, the animal-model study demonstrated that “Finasteride treatment causes several alterations in the hippocampus,” the section of the brain responsible for processing long-term memory and emotional responses.

Phase I, published in the July 2017 edition of The Journal of Steroid Biochemistry and Molecular Biology and titled Neuroactive Steroid Levels and Psychiatric and Andrological Features in Post-Finasteride Patients, demonstrated that PFS patients suffer from altered levels of critical brain-function regulators, including neuroactive steroids. That three-year study, in which 16 men with PFS and 25 control patients were evaluated, also uncovered evidence of neuropathy of the pudendal nerve among those with severe erectile dysfunction.