Facts laid out in the eight-page complaint include: 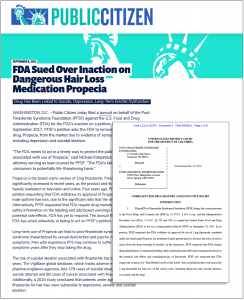 “The FDA needs to act in a timely way to protect the public from the risks associated with use of Propecia,” Michael Kirkpatrick, the Public Citizen attorney serving as lead counsel, said in its own announcement of the civil action. “The FDA’s failure to act exposes consumers to potentially life-threatening harm.”

“False information from the FDA leads physicians to dismiss patients, while some even tell them their symptoms are not real,” added PFS Foundation CEO John Santmann, MD. “Without effective treatments for PFS, use of this cosmetic drug can lead to a lifetime of side effects. The drug ruins more lives every day and has no business being on the market.”

Originally filed in September 2017, our petition is comprised of 120 pages of scientific and medical evidence that finasteride poses a threat to public health and should be taken off the market. Included therein are abstracts from eight thoroughly documented cases of PFS patients who took their own lives due to suffering wrought by the condition.

Among those cases is Daniel Stewart, a 37-year-old Professor of Criminal Justice at the University of North Texas who in 2014, shortly after participating in our PFS clinical research at Baylor College of Medicine (BCM), hung himself at his home in Denton, Texas.

Also among those cases is a 42-year-old male “who developed psychoneurocognitive and sexual symptoms starting 2 years after initiation of treatment that never abated after discontinuation of finasteride… [yet had] no pre-existing sexual dysfunction, psychiatric or medical conditions prior to initiation of treatment… The Autopsy Report noted evidence of hanging by a belt...The brain and spinal cord were fixed in formalin prior to further examination and donated to medical researchers for studies currently underway.”

That patient also participated in our PFS clinical research at BCM, which means that eight percent of all the patients in those studies committed suicide.

By December 2020, more than three years after we filed the petition, the FDA had not responded, yet a slew of new evidence had emerged to support our plea. So we filed two supplements to the petition.

Supplement 1 contained scientific research, epidemiological data and other pertinent information, including animal studies, clinical studies and label updates mandated in Europe by the European Medicines Agency, about anxiety and suicidal ideation, that the FDA has not implemented in the US.

Supplement 2 referred exclusively to the Reuters report headlined Court let Merck hide secrets about a popular drug’s risks. Published in September 2019 after a yearlong investigation, the story uncovered testimony in the US Propecia litigation by former Merck executives suggesting that the pharmaceutical giant downplayed the drug’s side effects during clinical trials. Specifically, Merck found evidence of persistent side effects in their original trials but failed to disclose such in their product label. Compounding this lack of transparency, the judge in the litigation, Brian Cogan, inexplicably allowed Merck and plaintiffs’ lawyers to keep information submitted in court under wraps.