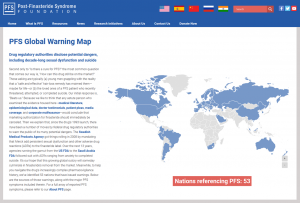 The PFS Foundation has launched an interactive map plotting all the nations known to have issued warnings of finasteride’s potential to cause persistent adverse reactions, aka post-finasteride syndrome (PFS).

Fifty-three nations, from Argentina to the United States, currently comprise our PFS Global Warning Map. Each links to a table entry that in turn links to at least one original document from the respective nation’s drug regulatory authority (DRA).

Additionally, English translations are provided for all non-English texts.

Taken as a whole, the map offers a broader consensus of PFS symptoms than any single DRA. Similarly, it provides insight into how the most vigilant DRAs (a) determine causal associations between finasteride and case reports of adverse reactions, (b) alert health professionals when new clinical research and epidemiological data emerge, and (c) craft regulatory policy based on the potential dangers of finasteride therapy. For instance:

Going forward, we plan to update the map (which is housed in the Resources menu on our navigation bar) with new DRA warnings, guidelines, and/or actions about finasteride as soon as they become available.

To assist in this effort, we invite interested parties living in countries not currently represented on the map to reach out to their local DRAs and request electronic copies of the most recent finasteride product literature and/or news. All such content should be emailed to Philip Roberts.