The Boot has begun kicking Propecia. 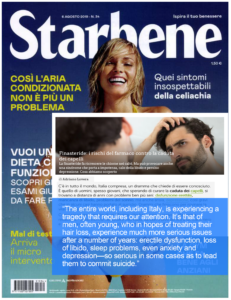 Last week, Italian health and lifestyle magazine Starbene, which boasts a weekly circulation of 350,000, ran a story on PFS that begins:

The entire world, including Italy, is experiencing a tragedy that requires our attention. It’s that of men, often young, who in hopes of treating their hair loss, experience much more serious issues after a number of years: erectile dysfunction, loss of libido, sleep problems, even anxiety and depression—so serious in some cases as to lead them to commit suicide.

Headlined With this Hair-loss Medication Comes Great Risk (English translation here), the 1,000-word feature by Adriano Lovera features an interview with Roberto Cosimo Melcangi, PhD, at the University of Milano’s Department of Pharmacological and Biomolecular Sciences, who most recently demonstrated epigenetic modifications in PFS patients.

“The problem is that this alopecia therapy is often prescribed to patients even younger than 20 years of age,” Melcangi says of finasteride.

“Many studies have been carried out by now, but we still have not succeeded in even precisely defining post-finasteride syndrome,” he continues. “The good part is that, nowadays, many dermatologists are aware of the risks and, as a result, they are more cautious when prescribing the drug.”

However, the professor adds, “It’s essential not to give in to the temptation of trusting some forum that recommends do-it-yourself therapies. There is a risk of causing even more damage.”

Starbene’s story marks the first time a major Italian consumer magazine has delved into PFS. That, after in year in which we saw a band of other European nations—including Switzerland, Germany and the Netherlands—swing into PFS-awareness mode.

It also marks the first report of litigation by Italian patients.

“We entrusted in-depth studies to experts, and after the summer, will be ready to file some lawsuits,” says attorney Laura Cagnin, who’s working with the Association of Victims of Finasteride, founded two years ago by Sylviane Millon-Mathieu to generate PFS awareness in her home country of France. Sylviane, whose son Romain took his own life in 2016 after a four-year battle with PFS, has since been profiled in a number of French media reports on the condition, and has most recently consulted on similar civil litigation in Germany.

PFS Awareness Unfurling at a Furious Pace in France

PFS is Front-page News in the Netherlands

French Urologist to Top TV News Mag: Propecia is a potentially dangerous drug—’I even told my brother-in-law to stop taking it’