Thirty-thousand Frenchman can’t all be immune to PFS. And the nation’s most widely read news magazine seems bent on proving it. 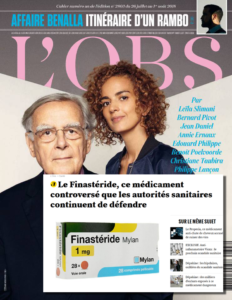 “Can we trust drug-monitoring agencies?… The suffering of thousands of men exposed to [finasteride] is worth exploring. They hoped…to slow their hair loss. What happened instead? Depression, suicidal ideation, severe insomnia, serious sexual dysfunction, and an inability to work… 30,000 men in France—and millions around the world—take the drug every day…

“Health authorities are only formally linking finasteride to issues of a sexual nature… What about the range of psychiatric, cognitive and physical side effects that victims call ‘post-finasteride syndrome’?”

“In 2007, Sweden asked MSD about a possible link between finasteride and depression. But it took until June 2017 for the accumulation of adverse drug reaction (ADR) reports…to push the PRAC to add ‘depression’ and ‘suicidal ideation’ to the warnings on the product insert.

“In April 2018, the PRAC decided to add the risk of anxiety to the insert. In 2013, however, the director of AFSSAPS (ANSM’s predecessor) claimed that these side effects were ‘well known,’ citing only passing sexual difficulties or issues.”

The story also looks ahead to a less pharmacologically perilous world. “What can be done to dispel doubts regarding the causality linking finasteride and what they call post-finasteride syndrome?” asks L’Obs. 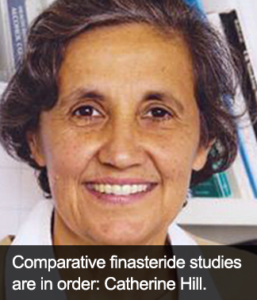 Catherine Hill, an epidemiologist with the Gustave Roussy Institute in Paris, offers this suggestion: “We need to do comparative studies: Do finasteride users have more psychiatric problems than those who do not take the drug?”

Among the other researchers cited are Roberto Melcangi , PhD, head of the Neuroendocrinology Unit in the Department of Pharmacological and Biomolecular Sciences at the University of Milano, and Steven Belknap, MD, Assistant Professor of Dermatology at Northwestern University’s Feinberg School of Medicine, both of whom conduct PFS Foundation-sponsored studies.

“[W]hen you stop treatment, the [DHT] should in theory function as it did before, which is absolutely not the case,” says Melcangi. “Finasteride seems to activate mechanisms which we do not comprehend. It’s incredible!”

The July 21 L’Obs story isn’t the first time the weekly magazine has taken up the PFS-awareness charge. Eight months ago, it ran a 4,000-word report headlined Prescription Hair-loss Medication Propecia Accused of Ruining Lives (English translation here). That story focused on the 2016 suicide of 25-year-old PFS patient Romain Mathieu, while noting that “Nearly 128,000 Frenchmen were exposed to [finasteride] in 2016.”

We yet again remind all PFS patients who have not yet done so to report their symptoms to the FDA’s MedWatch program as directed here. Those living outside the US should access the WHO’s Collaborating Centre for International Drug Monitoring list of pharmacovigilance agencies, as well, and report to their respective health agency.

We thank the more than 14,000 PFS patients, their loved ones and health care professionals who to date have (according to the World Health Organization’s VigiBase database) filed ADR reports with regulatory agencies across the globe. Without them, the regulatory action we’ve seen recently – such as in the UK, Korea, Canada and Germany – might never have come to pass.