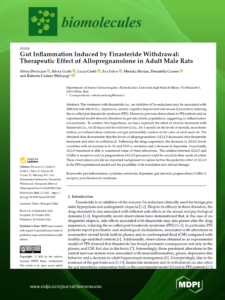 The neurosteroid allopregnanolone (ALLO) has proved effective in counteracting some of the finasteride-induced alterations in gut microbiota, according to new research at the University of Milano (UniMi).

Titled Gut Inflammation Induced by Finasteride Withdrawal: Therapeutic Effect of Allopregnanolone in Adult Male Rats, and funded in part by the PFS Foundation, the study was published October 26 in Biomolecules.

Roberto Cosimo Melcangi, PhD, Head of the Neuroendocrinology Unit in the Department of Pharmacological and Biomolecular Sciences at UniMi, who headed a team of six researchers on the project, writes:

[P]revious observations in PFS patients and an experimental model showed alterations in gut microbiota populations, suggesting an inflammatory environment. To confirm this hypothesis, we…explored the effect of chronic treatment with finasteride…and its withdrawal…on the levels of steroids, neurotransmitters, pro-inflammatory cytokines and gut permeability markers in the colon of adult male rat. The obtained data demonstrate that the levels of [ALLO] decreased after finasteride treatment and after its withdrawal.

Following the drug suspension, the decrease in ALLO levels correlates with an increase in IL-1 and TNF-, serotonin and a decrease in dopamine. Importantly, ALLO treatment is able to counteract some of these alterations.

[B]ecause (i) sexual dysfunction may be related to alterations in gut microbiota and (ii) the existence of the well-described gut-brain axis, observations here obtained may provide an important background to explore [the] protective effect of ALLO on psychiatric and andrological dysfunctions, laying the groundwork for possible therapy in PFS patients.

Separately, Prof. Melcangi tells us: “To our knowledge, this study marks the first-ever demonstration that it’s possible to recover from a PFS symptom. Next we’ll be extending our analyses to other symptoms characteristic of the condition.

“Meanwhile, it’s important to remember that a clinical approach to developing effective therapies is only possible with strong preclinical results, aka those in an animal model,” he adds.

Publication of this ALLO study marks the completion of Phase VI of Team Melcangi’s ongoing investigation into PFS. Now in its sixth year, the investigation has yielded six previous projects:

• Phase V found that finasteride, a 5-alpha reductase (5α-R) inhibitor, also inhibits phenylethanolamine N-methyltransferase (PNMT), an enzyme found primarily in the adrenal gland, which in turn may play a role in producing some of the condition’s most common side effects. Titled Three-Dimensional Proteome-Wide Scale Screening for the 5‑Alpha Reductase Inhibitor Finasteride: Identification of a Novel Off-Target, the study was published in April 2021 in the Journal of Medicinal Chemistry.

Additionally, as an offshoot of Phase V, Prof. Melcangi made a presentation titled Finasteride Inhibits Epinephrine Synthesis in Humans: Implication for Sexual Dysfunction at the 24th European Congress of Endocrinology in May of this year. He concluded that:

[F]inasteride affects epinephrine [aka adrenaline] synthesis by blocking PNMT enzymatic activity in humans. This block can have an impact in sexual behavior, as suggested in an animal model treated with finasteride. In addition, the alterations observed in [the mass of erectile tissue forming the bulk of the penis] indicate possible impairment of erectile function. Our results suggest possible mechanisms for the sexual dysfunction observed after finasteride treatment in humans. 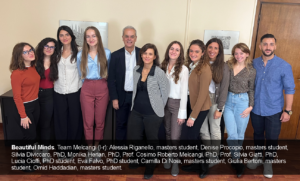 • Phase IV was published in the Journal of Endocrinological Investigation in September 2020. Titled Alterations of gut microbiota composition in post-finasteride patients: a pilot study, the research demonstrated the presence of altered gut microbiota in PFS patients.

• Phase III was published in Endocrine Connections in July 2019. Titled Altered methylation pattern of the SRD5A2 gene in the cerebrospinal fluid of post-finasteride patients: a pilot study, the study concluded that methylation of the SRD5A2 promoter in PFS patients “could represent an important mechanism of neuroactive steroid levels and behavioral disturbances previously described in PFS.”

• Phase II was published in Psychoneuroendocrinology in January 2019. Titled Treatment of male rats with finasteride, an inhibitor of 5alpha-reductase enzyme, induces long-lasting effects on depressive-like behavior, hippocampal neurogenesis, neuroinflammation and gut microbiota composition, the animal-model study demonstrated that “Finasteride treatment causes several alterations in the hippocampus,” the section of the brain responsible for processing long-term memory and emotional responses.

• Phase I was published in the Journal of Steroid Biochemistry and Molecular Biology in July 2017. Titled Neuroactive Steroid Levels and Psychiatric and Andrological Features in Post-Finasteride Patients, the research demonstrated that PFS patients suffer from altered levels of critical brain-function regulators including neuroactive steroids, and uncovered evidence of neuropathy of the pudendal nerve among those with severe erectile dysfunction.

Phase VII, which is scheduled to get under way in February 2023, is a final analysis of recently wrapped up research that identified, via a next-generation sequencing technology known as RNA-seq, several genes that are likely responsible for the side effects observed in PFS patients.

But to ensure timely completion of this important project—and its publication in a high-impact-factor, peer-reviewed medical journal—we still need to reach our fundraising target of $50,000 by the end of January.

So if you’ve not already contributed (or even if you have), please consider giving generously:

Anyone living in the US who suffers from PFS should report his or her symptoms to the US FDA.

Anyone living outside the US who suffers from PFS should report his or her symptoms to the US FDA as well as to his or her local drug-regulatory authority (DRA), as directed on our Report Your Side Effects page.