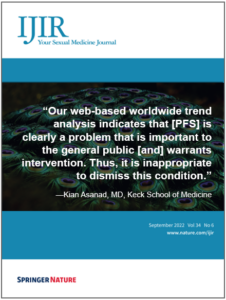 If you've ever Googled "post-finasteride syndrome," chances are you've earned a place in the annals of medicine.

Researchers at the University of Southern California’s Keck School of Medicine (KSM) have analyzed worldwide public interest in finasteride’s impact on sexual health and determined that PFS is “clearly a problem…that warrants intervention."

Titled Global online interest in finasteride sexual side effects and published in the International Journal of Impotence Research, the study was led by Kian Asanad, MD, Chief Resident Physician in Urologic Surgery at KSM.

Dr. Asanad and his team of three researchers began with the premise that:

72% of Americans look online for health information, and 77% of these used a general (non-medical) search engine such as Google... Qualitative data have shown that patients use web-based health information for everything from direct decision making to guiding discussions with their care team. Understanding these patterns may facilitate a greater understanding and transparency to the patient/physician relationship.

Next, the team compared the total annual number of searches for each term, as conducted in the US, UK and Australia, from 2004 through 2020.

“We observed a significant interest in ‘post-finasteride syndrome.’ There was a steep growth trend, specifically between 2009 and 2012, with an average [annual percent change of] +151.7,” writes Dr. Asanad, noting that 2012 is when the FDA mandated that the following adverse reactions be added to the Propecia prescribing information: “sexual dysfunction that continued after discontinuation of treatment, including erectile dysfunction, libido disorders, ejaculation disorders, and orgasm disorders." 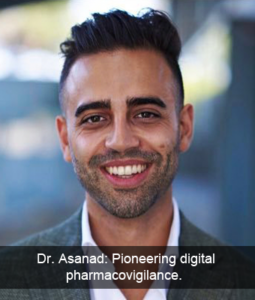 That “significant interest” becomes even more pronounced when search volumes for the generic name of the prescription hair-loss medication (finasteride) alone, and its brand name (Propecia) alone, are compared to those names within the context of terms that are defined, in part, as having a negative impact on human health.

Following are average annual percent changes for searches conducted in the US between 2004 and 2020:

“Much of the medical community has yet to recognize [PFS] as a real clinical entity. Our… analysis indicates that, nonetheless, [PFS] is clearly a problem that is important to the general public that warrants intervention. Thus, it is inappropriate to dismiss this condition,” says Dr. Asanad.

Despite digital access to copious quantities of medical literature on finasteride’s link to a host of adverse health events—including suicidality—doctors worldwide continue prescribing the drug with little or no warning to patients.

The latest nation to wake up to this recipe for biological disaster is Israel. Last week, the Holy Land’s oldest daily newspaper, Haaretz, published a story headlined Israeli Victims of Propecia Speak Out: ‘I Woke Up Into a Nightmare’.

Chronicled in the 6,700-word feature by Ronny Linder are three Israeli PFS patients (all of whom are referred to under pseudonyms): Uri, 35, Gil 42, and Erez, 49. 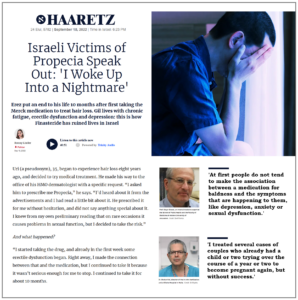 “He prescribed [Propecia] for me without hesitation, and did not say anything special about it,” recalls Uri of his dermatologist. That was 2014.

“The anxiety attacks began after about 10 months, and brain fog, a feeling that I was like an emotionless zombie,” he continues. “Then I told myself that maybe it’s the pills.” So he quit. But:

It didn’t end. I went into years of anxiety attacks, in certain periods even several attacks a day. I also had a long period of depression, with suicidal ideation. The zombie sensation stayed with me for at least six months. I stopped working… It took a great deal of time until the body found some sort of balance and, unfortunately, I still haven’t completely recovered.

Two years before Uri’s ill-fated consultation, Gil started down a similar road. He tells the paper:

I had slight hair loss along the sides at the top of my head. I went to a dermatologist at my HMO and asked if she thought it was hair loss. She examined me and said that yes, it was, and that if I didn’t do something about it then I would go bald… At that same appointment she prescribed Propecia for me… I knew that I was taking something hormonal, and I had certain concerns, but the doctor didn’t warn me of any side effects… [T]wo or three weeks after I started, I had a sensation as if a splint had been inserted in my head.

After a few weeks, Gil quit Propecia cold turkey, only to experience what PFS patients call “the crash”:

It’s the most horrific feeling you can imagine—as if all of the systems in my body have shut down. The entire body feels like it is being electrocuted… I felt like I was going to die… In the emergency room, they didn’t know what was happening, they didn’t do any hormonal tests; they released me and sent me home.

Soon afterwards, he was beset by suicidal ideation:

I spoke about it a great deal. I feel that in a certain sense, I lost my life. I did not continue my studies. I didn’t have a partner… I am not at all optimistic. And the worst part is that I am not alone—there are entire forums online where…it is like entering hell. People describe how they are fighting and trying so hard to get back to what they once were… Their doctors don’t know how to help them.

As horrific as things have been for Gil, his case pales in comparison to that of the third PFS patient. In May 2016, 10 months after first swallowing finasteride, Erez took his own life. His suicide note, Haaretz reports, reads:

Until late July 2015, I was a very healthy individual, optimistic and strong, creative and warm, a devoted father and husband to my children and my wife. I had a successful career and I was always surrounded by friends and professional colleagues. But everything changed the day that I started to take a pill called Propecia, a medication that in retrospect destroyed my life… I lost…my sense of self-worth, which along with the physical symptoms created in me a cycle of immense frustration and fear of the future… I changed in every possible way, and therefore I have decided not to go on living.

Erez’s widow, Galia, has since filed a lawsuit against Merck, as well as the HMO and doctor responsible for prescribing the drug to her husband without warning of the risks, Haaretz reports.

“As far as I’m concerned, they killed him the day he started taking the medication,” she tells the paper.

Big Data to the Rescue?

Also cited is Mayer Brezis, MD, an internal medicine expert at the School of Public Health at Hebrew University in Jerusalem, who notes:

It always takes a long time for a consensus to form on a causal relationship between side effects and a medication, and opponents will crop up along the way—forces that usually have a connection to the industry. It is a gradual process, because at first people do not tend to make the association between a medication for baldness and the symptoms that are happening to them…and the doctors are also unaware of any connection. Slowly but surely, reports and research studies and awareness increase—and from there begins a snowball effect of exposing the intensity and extent of the symptoms.

Dr. Brezis also believes that the current model of pharmaceutical-product labels being the centerpoint of patient safety should be scrapped:

The insert is a clumsy and unuseful tool. It is an exercise in [drug companies] legally covering their butts. People don’t read it, and if they do read it, usually they do not understand it correctly. When a person is looking for a cosmetic drug to improve their quality of life, there is an obligation to warn him of the risk liable to actually harm his quality of life… The doctor who offers a medication is obliged to share with the patient the risks and alternatives for treatment, as obligated by the law on patient rights… What’s necessary is a revolution in the realm of friendly explanation.

It took two decades to understand the severe dangers from Propecia… Now, in the era of big data, it is possible to speed up this procedure by partnering with the patient: We have to build a user-friendly, smart online reporting system… Connecting these reports with the HMO’s databases would enable analysis of the connection between side effects and taking the medication, by comparing patients with similar characteristics who are not taking it.