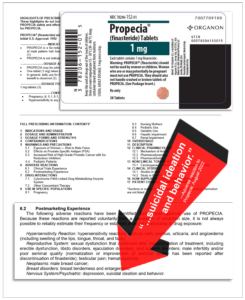 ● Hypersensitivity Reaction: hypersensitivity reactions such as rash, pruritus, urticaria, and angioedema (including swelling of the lips, tongue, throat, and face);

Anatomy of a revision

Organon was directed to add the potentially lethal ADRs as the result of an FDA Citizen Petition filed by the PFS Foundation in 2017, and amended in 2020. In June of this year, the FDA wrote to inform us:

[B]ased on our analysis of the information contained in part and prompted by your Petition, we are requiring that Organon make labeling changes…to clarify the risks of use of Propecia. We are requiring the addition of suicidal ideation and behavior to the list of nervous system/psychiatric reactions.

According to Screening for Suicide Risk in Primary Care, a 2013 study by the Agency for Healthcare Research and Quality (AHRQ), which is overseen by the US Department of Health and Human Services (HHS), the latest ADRs added to the Propecia label are thusly defined:

Prior to suicidality being added to the Propecia label, the only ADR listed in the Nervous System/Psychiatric category was depression, beginning in 2011. Yet the FDA has been aware of suicide cases among finasteride patients for more than a decade. In its 2011 Approval Package for the addition of depression to the label, the agency, which is also overseen by HHS, wrote:

An association between the use of finasteride and depression-related or suicide-related adverse events is possible based on the [Adverse Event Reporting System] cases we reviewed and information available in the medical literature… We agree with the sponsor’s assessment to add depression to…the label. We also identified cases of suicide-related adverse events, which further support the potential association with finasteride.

Worth noting as well is that, although Organon updated its Propecia PI to include suicidality, the drug’s Patient Product Information (PPI—aka Patient Package Insert), has not been updated. The PPI housed on Organon’s website as of press time was last revised in October 2021, and makes no reference to suicidality.

According to FDA guidelines:

PPIs for [most] prescription drugs are submitted to the FDA voluntarily by the manufacturer and approved by the FDA, but their distribution is not mandated.

And to be clear, the PFS Foundation is not aware of any arrangements Organon has made with the FDA to update the Propecia PPI to include suicidality, nor of any timeline for doing so, if at all.

Based on precedent, however, it would be easy to argue that Organon should have revised the PPI along with the PI. From 2001 through 2014, according to documents housed on the FDA’s database of approved drugs, Merck did revise each of its Propecia PPIs in tandem with the PI revisions, and those revised PPIs were included at the end of the same PDFs as the PIs. It's unclear why, in June 2021, Merck and/or the FDA stopped including a corresponding revised PPI in the revised PI file.

● Organon’s most recently revised Propecia PI ends with this message:

Physicians should instruct their patients to read the patient package insert before starting therapy with Propecia and to read it again each time the prescription is renewed so that they are aware of current information for patients regarding Propecia.

Read this Patient Information before you start taking Propecia and each time you get a refill. There may be new information. 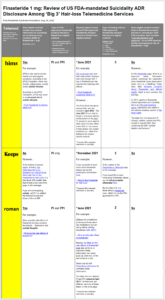 (a) The FDA knew about cases of Propecia patients killing themselves, possibly due directly to the drug,

(b) so the FDA ordered Propecia manufacturer Organon to add suicidality to the product label, a complex document, running 7,154 words, that’s written in scientific terms for doctors and pharmacists, rather than patients, and,

(d) the current version of the patient package insert makes no mention of the fact that Propecia could cause the intended readers of that document—patients—to kill themselves.

Compounding this lack of transparency, the FDA, along with mandating that suicidality be added to the Propecia label, could have mandated that Organon distribute a Dear Health Care Provider Letter (DHCP), which is:

intended to alert physicians and other health care providers about… an important safety concern that could affect the decision to use a drug or require some change in behavior by health care providers, patients, or caregivers to reduce the potential for harm from a drug.

But the FDA did not mandate a DHCP as part of its latest Propecia label revision. That means, unless physicians and/or pharmacists happen to see the new suicidality ADRs in the revised PI, and alert their patients accordingly, those patients may never know they are being put in the way of potentially fatal harm.

Since their foundings in 2017, Hims, Keeps, and Ro (aka Roman) have raised about $1.3 billion in venture capital, according to CrunchBase, giving them ample means to aggressively target men looking for hair-loss treatments.

Over the past five years, all three startups, which dispense prescription drugs via video consultations with doctors, have done an excellent job acquiring new customers. Hims, for example (the only public company among them), grew its subscriber base from 453,000 in 2021 to 817,000 in 2022. And Ro, in May, was ranked No. 38 on the CNBC Disruptor 50 list, having not been ranked at all last year.

The problem is, according to a review (above) by the PFS Foundation of all three telemeds’ consumer digital content, not one of them, as of press time, has followed Organon’s lead by swapping in the revised Propecia PI containing suicidality ADRs.

Meanwhile, more and more PFS patients who contact us for help tell us that they were prescribed finasteride by Hims, Keeps or Ro, among other telemeds. As just three examples:

I took finasteride for about 7 months through Roman. About 2 months in, I started to experience increasing anxiety, which I never had before. Over the next few months the anxiety increased to a point where I felt I’d totally lost my mind and depression set in. I wouldn’t wish what I’ve experienced on my worst enemy. All communication including my prescription was done through e-mail only. I was sent a PDF, which gave finasteride information. It did include possible side effects of sexual dysfunction but that was it. PFS was never mentioned in any form. I only found out about it after experiencing insane anxiety for 9 months and did my own research for possible causes. I wish PFS was included in their possible side effects PDF.

I took finasteride from April 2019 to September 2019. I developed sexual side effects from the drug that haven’t improved in over 2 years. I have erectile dysfunction now. I got the medicine from Keeps.com, and the only warning about side effects the doctor gave me was: “They almost always go away when you stop using the treatment.” This hasn't been the case. I’m 25 and have erectile dysfunction.

I have had a horrible experience with Hims, their website only lists a few possible side effects, and they play them down as if they happen you can just stop taking the medication. I could barely get a response from them or any information on my side effects until I started mentioning legal action, negligence, and malpractice.

To be clear again, we are not aware of any arrangements Hims, Keeps and/or Ro may have made with finasteride suppliers or the FDA to include the updated Propecia PI in their digital content so to comply with federal regulations.

But we are of the opinion that, in the interest of their customers’ physical and mental well-being, all three companies should do so as soon as possible