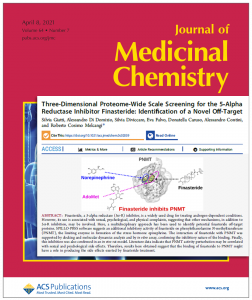 Phase V of the PFS Foundation-sponsored research at the University of Milano (UniMi) has found that finasteride, a 5-alpha reductase (5α-R) inhibitor, also inhibits phenylethanolamine N-methyltransferase (PNMT), an enzyme found primarily in the adrenal gland, which in turn may play a role in producing some of the condition’s most common side effects.

Titled Three-Dimensional Proteome-Wide Scale Screening for the 5‑Alpha Reductase Inhibitor Finasteride: Identification of a Novel Off-Target, the study is published this month in the Journal of Medicinal Chemistry.

Separately, a new meta-analysis, with a cumulative subject pool of 199,454, shows that finasteride use is “significantly associated with clinical depression” and “with strongly suggestive evidence of increased risk of suicidal ideation and suicidal behavior.”

Titled Risk of Depression Associated With Finasteride Treatment, that study appeared last month in the Journal of Clinical Psychoparmacology.

Roberto Cosimo Melcangi, PhD, led a team of six researchers at UniMi’s Department of Pharmacological and Biomolecular Sciences who deployed SPILLO-Potential Binding Sites Searcher for the first time ever in a PFS investigation. SPILLO-PBSS software was aimed at identifying alternative off-target protein interactions of finasteride.

Finasteride’s ability to inhibit PNMT was tested by treating live male rats and analyzing norepinephrine and epinephrine (aka adrenaline) levels in their adrenal glands. PNMT principally catalyzes the conversion of norepinephrine to epinephrine and is mainly involved in the stress response. Epinephrine is strongly correlated with mood alteration and depression. In addition, several studies indicate a role for this hormone in the control of erection.

Among the team’s findings and conclusions:

Phase IV of Prof. Melcangi’s research was published in the Journal of Endocrinological Investigation in September 2020. Titled Alterations of gut microbiota composition in post-finasteride patients: a pilot study, the research demonstrated the presence of altered gut microbiota in PFS patients.

Phase III was published in Endocrine Connections in July 2019. Titled Altered methylation pattern of the SRD5A2 gene in the cerebrospinal fluid of post-finasteride patients: a pilot study, the study concluded that methylation of the SRD5A2 promoter in PFS patients “could represent an important mechanism of neuroactive steroid levels and behavioral disturbances previously described in PFS.”

Phase II was published in Psychoneuroendocrinology in January 2019. Titled Treatment of male rats with finasteride, an inhibitor of 5alpha-reductase enzyme, induces long-lasting effects on depressive-like behavior, hippocampal neurogenesis, neuroinflammation and gut microbiota composition, the animal-model study demonstrated that “Finasteride treatment causes several alterations in the hippocampus,” the section of the brain responsible for processing long-term memory and emotional responses.

Phase I was published in the Journal of Steroid Biochemistry and Molecular Biology in July 2017. Titled Neuroactive Steroid Levels and Psychiatric and Andrological Features in Post-Finasteride Patients, the research demonstrated that PFS patients suffer from altered levels of critical brain-function regulators including neuroactive steroids, and uncovered evidence of neuropathy of the pudendal nerve among those with severe erectile dysfunction. 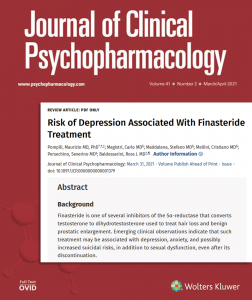 In all, the team analyzed 14 peer-reviewed clinical studies, published between 2002 and 2018, that included reports of changes in mood, and suicidal ideation or behavior associated with finasteride use. The cumulative number of subjects exposed to finasteride was 102,520, and 96,934 not exposed to the drug. Among the team’s findings:

This study “supports the conclusion that [finasteride] treatment is significantly associated with risk of clinical depression, as well as high rates of sexual dysfunction and evidence of increased risk of suicidal ideation and perhaps of suicidal behavior,” concludes Dr. Baldessarini.

It was funded in part by grants from the Bruce J. Anderson Foundation and the McLean Private Donors Psychiatry Research Fund.