SOMERSET, N.J., July 14, 2016 – A pair of European documentaries focusing on post-finasteride syndrome mark the first time the condition has been the subject of extended TV coverage on any continent.

The first documentary, titled “Pills in Search of an Illness,” debuted April 19 on the Spanish public TV network TV3 in Barcelona. 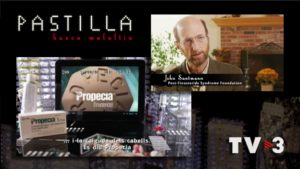 Reported by veteran investigative journalists Montse Armengou Martín and Richard Belis, the 75-minute program features a chapter on the dangers of finasteride, including patient interviews in Spain and the U.S.

The second, “The Wonderhair Pill,” debuted May 19 on the Belgian public TV network VRT in Brussels. In the 20-minute special, investigative journalists Michael Dilissen and Sofie Coucke go under cover to show how local pharmacists fill prescriptions for finasteride without any package insert whatsoever, or verbal explanation, despite the fact that the latter is mandatory.

English-language versions of both documentaries were made available for the first time this week.

In March 2015, the U.S. National Institutes of Health listed PFS on its Genetic and Rare Diseases Information Center, noting that “some patients who have taken finasteride have referred to side effects such as sexual dysfunction and depression (sometimes severe)… Studies sponsored by the NIH and other organizations are underway to better understand the effects of 5-alpha reductase inhibitor drugs.”